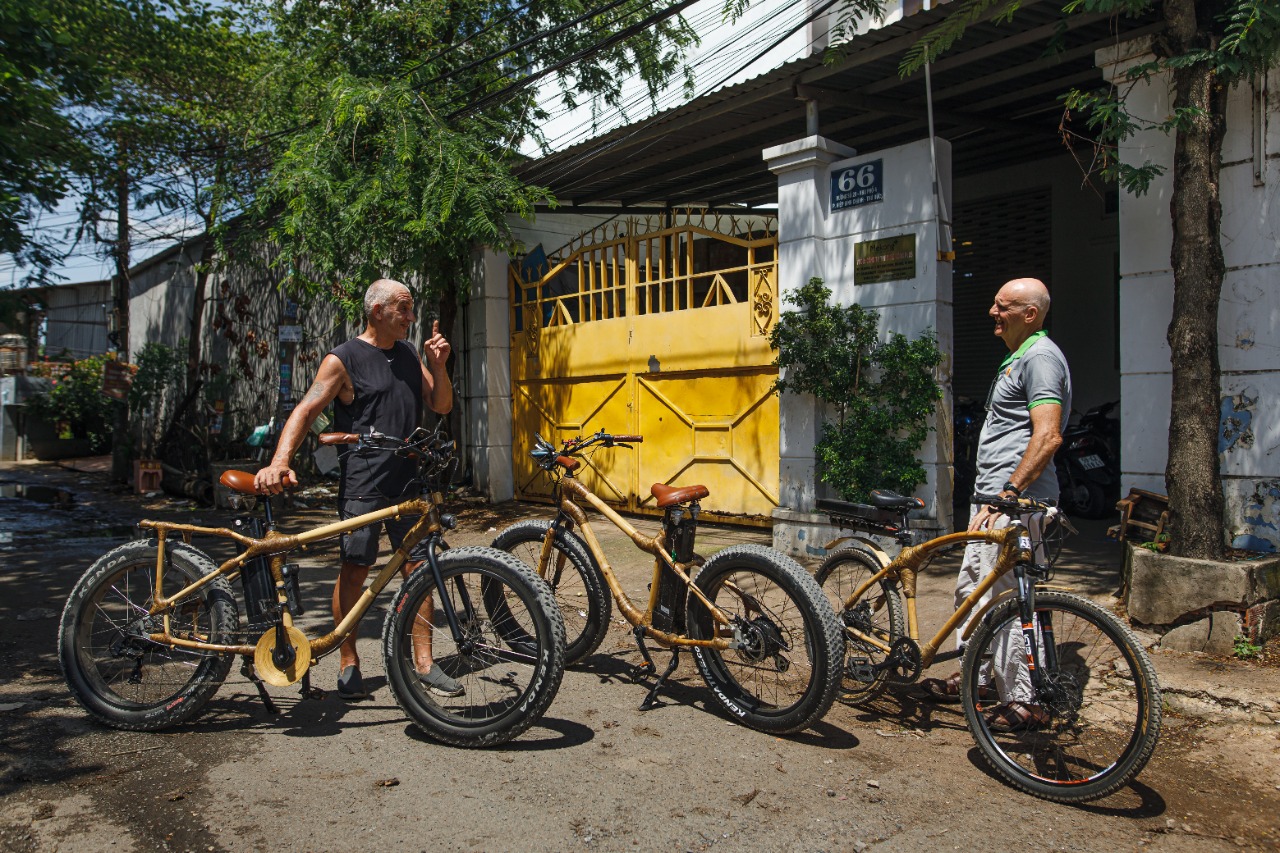 “They are strong, [and] in fact the same weight as aluminium!”

Bernard Kervyn, the founder of Mekong Quilts, jumped quickly into important details as he began dispelling numerous myths about the social enterprises’ renowned bamboo bicycles. Interestingly, the natural material serves as shocks and suspension from mother nature; riding comfortably on uneven roads that are all too common in Vietnam.

Bernard Kervyn had his first glimpse of bamboo bicycles 10 years ago. At that time, Craig Calfee of Calfee Design was featured on the BBC as the first bamboo bicycle maker in the world. That struck Bernard hard. Living in Vietnam where bamboo has been a traditional home material for thousands of years was the perfect excuse to begin producing one for Mekong Quilts. After numerous emails with various pre-existing bamboo bicycle makers, Bernard discovered that there was no way these makers were going to divulge their manufacturing secrets. 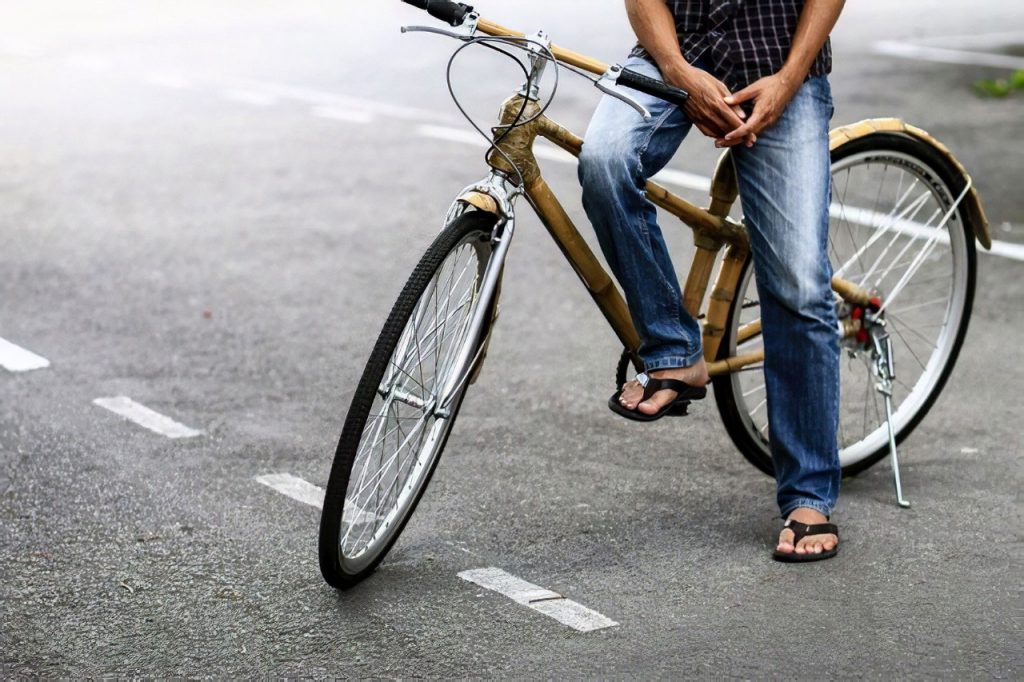 Mekong Quilts’ City Bike, made out of bamboo.

“We started [by] trial and error. [We] had a number of failures and learnt by doing,” he said.

After 23 failures and experimentation with various types of joints, Mekong Quilts settled on joint connections made of hemp fibre, synthetic fibre strengthened by epoxy. Perhaps not all materials used to build Mekong Quilts’ bamboo bicycles are organic, but Bernard insists that compromise is part and parcel of life, and certainly part and parcel of producing a bicycle that’s both organic and worth hundreds of thousands of miles. 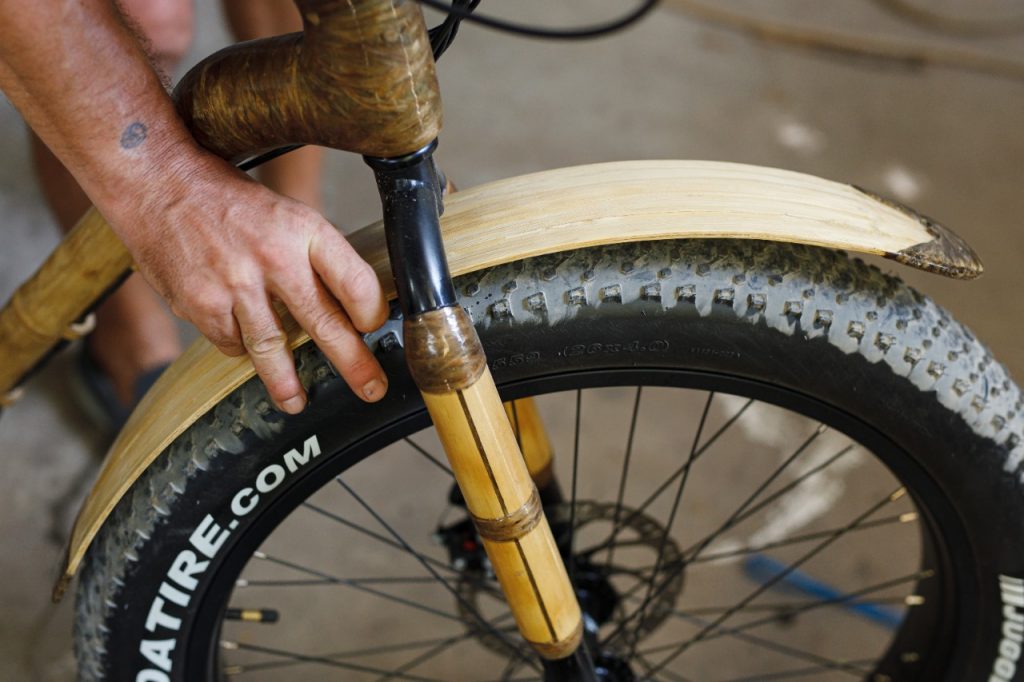 Joint connections made of hemp fibre on one of the bamboo bikes.

“Aluminium joints would be equally strong and [would] save labour but they do not look natural. The entire point of Mekong Quilts is to provide sustainable employment to the under-privileged!” Bernard reminded us.

Hard work pays off and Mekong Quilts has not seen a failed bike in more than four years. The oldest bikes owned by many expatriates living in Vietnam require nothing more than a new coat of lacquer. No doubt, laughter was the first thing that reached the Mekong Quilt’s headquarters in Thủ Đức district when Bernard first brought up the radical idea.

“At the start of our R&D phase, we challenged our strongest employees with the task of breaking the bamboo bicycle frames,” Bernard smiled. And no surprise that it was mission impossible, even with hammers and heavy tools. “They thought I was joking until they tried! He added.

The science behind bamboo’s structural strength is its inherent tensile strength, which is its resistance to breaking or splitting under tension. It is also fair to say that bamboo, in some ways, is stronger  than steel. For comparison, bamboo is also two to three times stronger than the densest hardwoods while being far lighter. Numerous historical bamboo bridges including Ko Paen bridge in Cambodia and the Trường Giang bridge in Vietnam are 770 metres and 500 metres long respectively; pre-existing testimonies of bamboo’s immense structure durability. 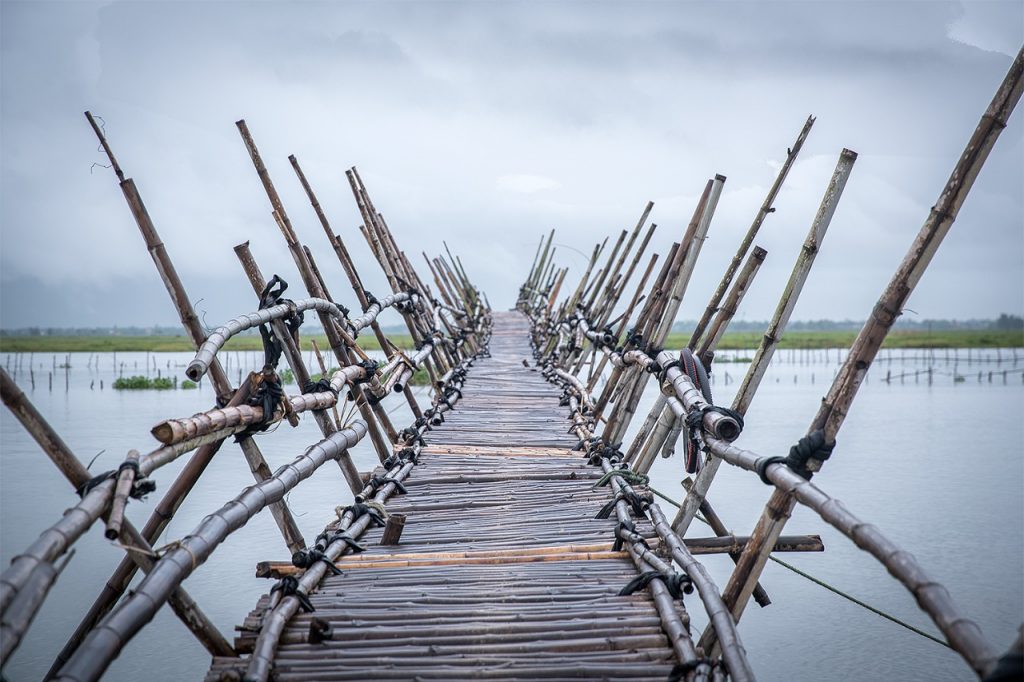 “Carbon fibre may be strong and popular for bicycles, but it is [also] more brittle than bamboo,” Bernard, emphasizing bamboo’s natural flexibility.

With an entire series of durable bamboo bicycles, including Mekong Quilts best-selling city and road bikes, Bernard knew it was time to move on to the next stage of development.

“Development [wise], we started before Tet [this year]. We had the good luck to meet with Alain Kit, a French specialist for electric bikes and fat bikes with a huge 12 year experience. The combination of Alain’s plan to produce electric fatbikes with our desire to expand our product range was the perfect match for us” Bernard explained.

Alain, who developed many major commuter and sporting bicycle styles in Europe in the last decade, now partners with the Mekong Quilts team earlier to realize his dream of creating the world’s first battery-powered pedal-assist bamboo bicycle. 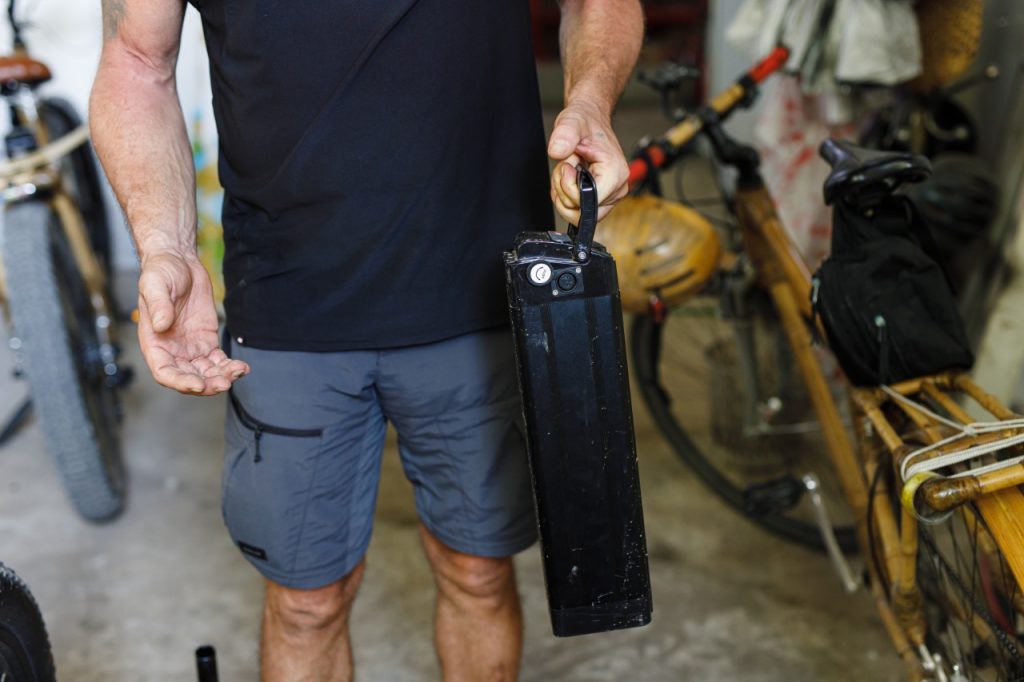 The battery of The Dragon electric fat-bike.

The social enterprise’s flagship electric fat-bike, now at its second improved rendition, is codenamed ‘The Dragon’ by Alain. Pillion safe and sporting a 350-watt motor from one of China’s most reputable electric motor makers, The Dragon will ride 120 km on a full recharge at a comfortable maximum speed of 40 km/h. On Alain’s virgin ‘trial run’ from Ho Chi Minh City to Vung Tau City, he brought along two spare batteries which turned out to be nothing but mere psychological insurance. 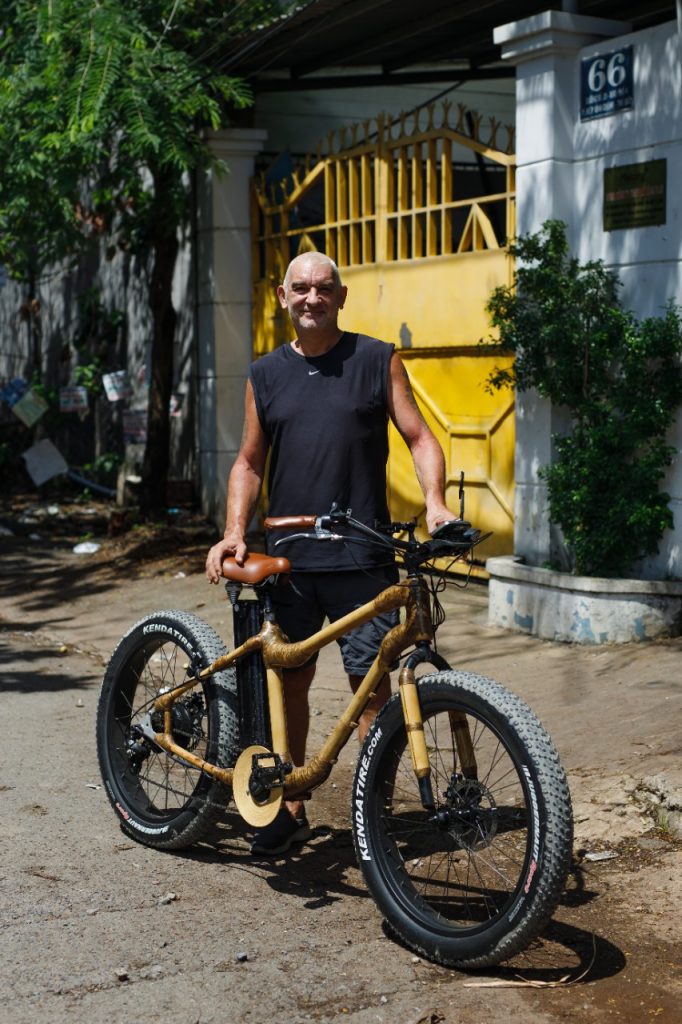 Alain and The Dragon electric fat-bike.

“In Vietnam, VND5000 of electricity will get you 80 kilometres [on average],” Alain said proudly.

Based on these numbers, commuting would be almost ten times cheaper than a gas-driven scooter. Bernard is thus confident that riders will get their money’s worth within four years. And he is in no way rejecting the co-existence of gas scooters and pedal-assist e-bikes.

A full picture beyond technicalities

Mekong Quilts’ line of bicycle products now also extends beyond simply ridables. Less than a year ago, the team developed a 4-layer laminated bamboo helmet which proved to be safer and more durable than foam-based ones. Bamboo-made baskets, fenders and bottle holders are also produced by Mekong Quilts’ workshop for customers who want a 100%-bamboo experience. Interestingly, the ‘Kidboo’, a learner kickbike designed for young children, has become one of the most popular bamboo products at Mekong Quilts. Evidently, Bernard believes that nurturing a sustainable lifestyle is key to long-term sustainability. 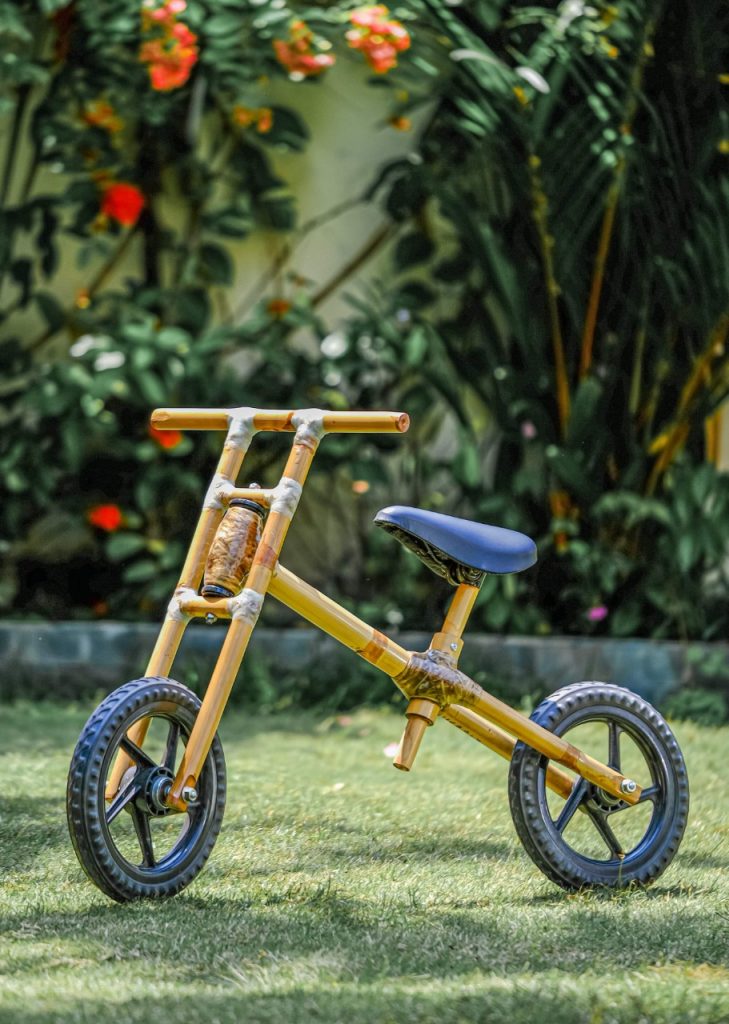 The Kidboo, a balance bike designed for kids between 2 to 4 years old.

“We organise bicycle trips to the Mekong Delta as often as possible,” Bernard said while describing Mekong Quilts’ regular bicycle trips to impoverished areas in southern Vietnam. On the last trip, he, his wife, and his guests hopped onto Mekong Quilts’ bamboo bikes where they visited quilting workshops and local eel farms. 100% of the participation fee goes into funding rural development and providing scholarship opportunities for children in the villages.

“We don’t know how long we can quilt, [but] in the meantime we can learn how to raise chickens sustainably!”.

Previous post: Sewing the big picture; how Mekong Quilts built a social enterprise based on fabrics 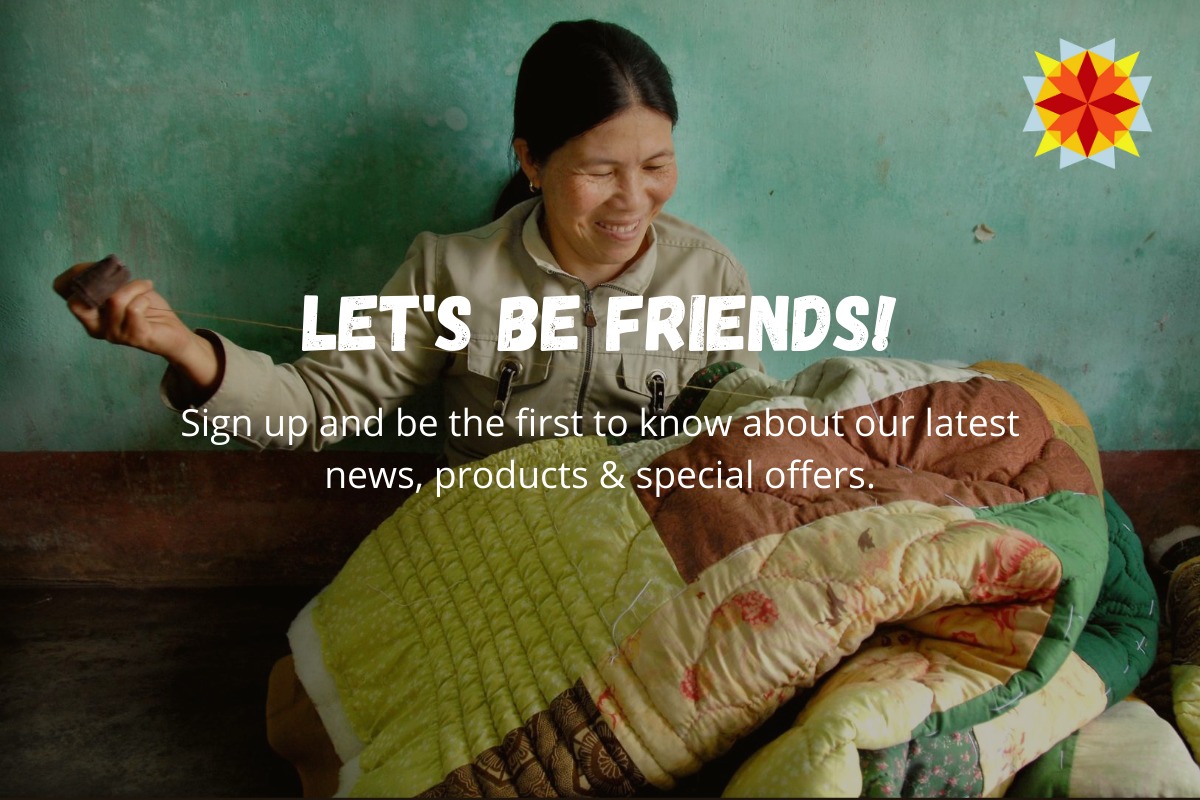